TechnologyInternationalNews
By Chey Phillips On Jul 13, 2018 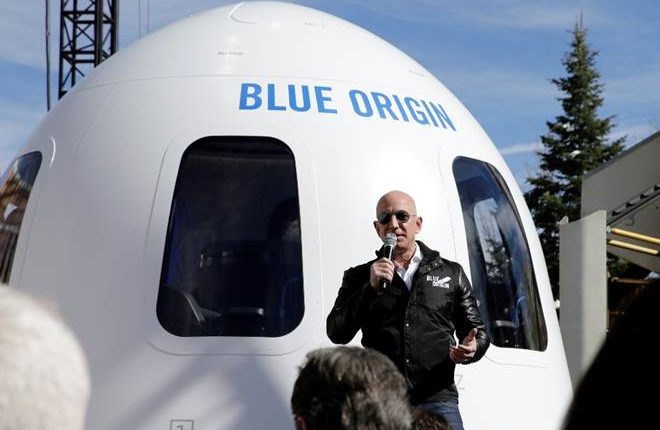 Not only Tesla CEO Elon Musk wants to bring people into space, but the founder of a web store platform Amazon, Jeff Bezos, has the same ambition. The Amazon boss wants to sell space flights next year. From 200,000 dollars tourists will be able to float through space. That’s what different sources at Blue Origin, the billionaire’s space company, tell news agency Reuters.

With Blue Origin, which was founded in 2002, Jeff Bezos not only wants to innovate space travel but also makes space tourism a reality. Engineers of the company are currently developing reusable rockets that can send people into space. The New Shepard rocket, which will circulate 100 kilometres above our planet, has to accommodate six passengers.

Employees of the aerospace company said that the missile has now made eight test flights without passengers. A manikin – nickname: the “Mannequin Skywalker” – was used during the tests in the US state of Texas.

According to various sources, the passenger capsule will be “tested in the coming weeks” by Blue Origin employees. Which employees will be the first to be sent in by the Amazon boss is not yet known. That’s how Reuters writes.

Space Colony
Bezos had already mentioned in an interview with Mathias Döpfner, the CEO of Axel Springer, that he wants to set up a space colony. According to him, that is the only way to save humanity. “First I want millions of people in space, then billions, and in the end I want a trillion people to live in space,” he said.

The Amazon founder – with 110 billion euro in the top of the list of the wealthiest people in the world – would organise the first sub-Orbital space flight for paying passengers next year.

The Cybersex is Rampant in Kenya, Children are an Easy Target

The US Government Appeals against Merger AT&T and Time Warner