USBusinessEurope
By Chey Phillips On Jun 27, 2018 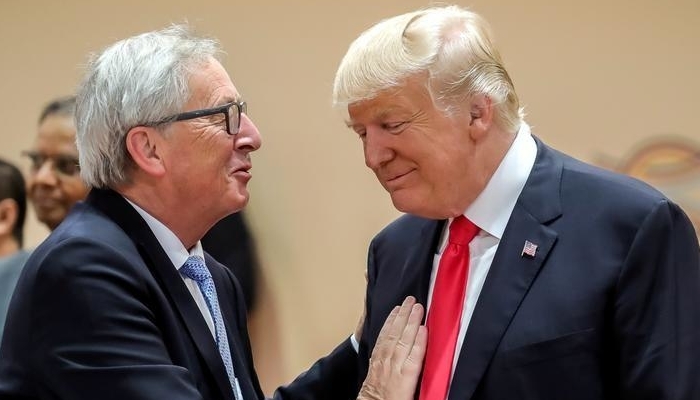 Juncker and Trump Talk about Disrupted Trade Relations. President Jean-Claude Juncker of the European Commission goes to the White House to talk with President Donald Trump about the unsettled trade relationship between the EU and the US, reports INC News.

Talks are going on to find a suitable date, Juncker’s spokesperson said Wednesday.

Juncker has offered Trump a quick stop at the G7 summit in Canada last month, to keep the communication channels open and to solve trade problems.

The Trump government has introduced import duties on European steel and aluminium. The EU then increased the tariffs for a range of American products.

Trump is threatening new charges on European cars and car parts, which could turn the dispute into a real trade war.

Will discuss new potential levies with Juncker. He recently said that Trump had called him a merciless ‘killer’ at the G7 meeting.

Negotiations
Discussions are currently pending between the US and the EU. The relationship with the Americans would also address on Thursday at the summit of EU government leaders in Brussels.

“Despite our tireless efforts to preserve the unity of the West, transatlantic relations are under enormous pressure from President Trump’s policies”, writes EU President Donald Tusk in his letter of invitation.

Unfortunately, the divisions go further than trade, ‘says the Polish former prime minister about Trump’s rejection of the climate agreement and the Iran deal.

I believe that, although I hope for the best, we are ready for it must be to prepare our union for worst-case scenarios, said Tusk.

Dead After A Collision Between Two Rubber Boats